Badgers tripped up by Buckeyes in 30-23 OT Thriller 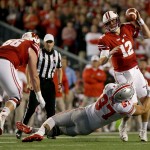 The last time Ohio State came to Madison it got a dose of Camp Randall magic. That was 2010, and in 2016 it was the Buckeyes turn at magic, as they came away with a 30-23 overtime victory over the Wisconsin Badgers.


After taking a 16-6 lead in to halftime, the Badgers couldn’t hold the Buckeyes down all game long and it led to a complete comeback thanks to star quarterback J.T. Barrett.

He threw for 226 yards and added 92 yards on the ground, coming up with three total touchdowns in the second half and overtime. The final of which was a 7-yard TD pass to Noah Brown in the overtime period that proved to be the game-winner.

That also put Wisconsin on its heels, needing a touchdown of its own to keep the game alive. UW’s hopes died as quarterback Alex Hornibrook slipped on a 4th-and-goal in overtime and couldn’t get a pass off.

It wasn’t the first mistake for the redshirt freshman quarterback, who finished the game completing 16 of 28 passes for 214 yards and one touchdown to one interception. He was also sacked four times and put under immense pressure throughout the game.

However, the Badgers showcased something everyone wanted to see — a good rushing attack.

MADISON, WI – OCTOBER 15: Corey Clement #6 of the Wisconsin Badgers runs with the football during the first quarter against the Ohio State Buckeyes at Camp Randall Stadium on October 15, 2016 in Madison, Wisconsin. (Photo by Mike McGinnis/Getty Images)


The return of Corey Clement led to the resurgence of the Badgers offense. Clement finished the day rushing for 164 yards on 25 carries and averaged 6.6 yards per carry.

Couple that with an opportunistic defense that held the Buckeyes out of the end zone for nearly three quarters, and the Badgers found a recipe for success on the night. That included an incredible effort from linebacker Jack Cichy.

Sadly, the recipe for UW’s success was also figured out by the Buckeyes. Wisconsin had little answer for the second half adjustments of the Buckeyes, but had just enough to keep themselves in the game.

Wisconsin started off the game by holding Ohio State in check on its first possession, and then turning around and orchestrating an 8-play, 52-yard drive that resulted in a 46-yard field goal from Andrew Endicott.

It was a sign of efficiency to come for the Badgers offense in the first half.

However, the biggest storyline of the first half was the return of running back Corey Clement. He was revved up and ready to go early on and it resulted in some big plays for the Badgers.

Clement put up 110 yards in the first half alone, with a 68-yard scamper from Wisconsin’s own 5-yard line highlighting his performance. That big play led to Wisconsin flipping the field quickly and it eventually led to a 24-yard touchdown pass from Hornibrook to Peavy.

He led a UW rushing effort that racked up 170 yards in the first half, with quarterback Alex Hornibrook going for 143 yards and a touchdown as well.

UW’s 313 yards in the first half were more than Ohio State came in averaging per game to opponents (244.6).

Wisconsin’s defense wasn’t too shabby in the first half, bending at times but holding the Buckeyes out of the end zone in the first 30 minutes of the game.

It all added up to a 16-6 advantage as the teams went in to the locker room at the half.

Ohio State appeared to make the better adjustments during half time and used it to their advantage in the third quarter.

The Buckeyes took advantage of the Badgers offensive woes, using a short field to get in to the end zone for the first time on a 1-yard effort from Barrett.

It was still 16-13 Badgers, but following a first down by Wisconsin the Buckeyes got the ball right back thanks to Hornibrook’s first pick of the night.

Ohio State pounced on that opportunity as well and took its first lead of the game (20-16) early on in the fourth quarter. Barrett got in the end zone from 8 yards out with 14:09 to play in the game.

Wisconsin wasn’t done in this game though, and the ensuing drive showed the mettle of the Badgers.

It would be the last great moment of the game for Hornibrook, who couldn’t find the extra spark needed in the final moments of this game.

After driving nicely to midfield, Wisconsin’s last effort stalled out and UW was forced to punt and flip the field with just :49 seconds left in the tie game. Ohio State took the knee and chose to play for the win in overtime.

Given the different momentum of the respective offenses, it was the smart choice for the visitors. That smart thinking paid off in overtime, as Barrett got the Buckeyes over the hurdles it set in front of itself due to penalties.

In the end, it was a the Buckeyes taking it 30-23 and Wisconsin left wondering “what if” in a true slugfest of a game.

The Badgers will look to erase their two-game losing streak with a trip to Kinnick Stadium to take on the Iowa Hawkeyes at 11am CT next Saturday.

The post Badgers tripped up by Buckeyes in 30-23 OT Thriller appeared first on Madtown Badgers.

There's no shame in having lost to visiting Ann Arbor and losing by a TD. There's no shame in losing to OSU by a TD, even if it's in our house. The fact is, these are two teams that have so far claimed what could be the right to play for a national title. One will get in, the other won't. They're ranked #2 & #4 in the nation.

Of course, doubters will say that both LSU and Michigan State were "overrated." I get tired of hearing it, but accept their beliefs - as an opinion. Everyone's entitled to it. But, in both cases, the Wisconsin defense exposed both of their weaknesses. Despite an inexperienced QB, they beat them, and they were ranked in the top 10 at the time. I choose to believe that the reason both teams have been on the skids since is because the Badgers beating them demoralized them so much that they couldn't rebound. I've seen it happen so often, and hear people say; "No! That's not it. They were overrated." Like I say. I don't believe that for a minute. You may not see it, but if you've played the game, and coached it, you know how important the psychology involved in the game really is. I believe in it, because I have played on teams that both won and lost. I've played on a team with enormous talent, yet we lost. I've been on a team that was weak, and really should have been a doormat, but the coaches knew how to press the right buttons on us, and scheme, to make us play above our ability, and it worked. I coached using that same philosophy. Always push your players to discover exactly how good they are "inside themselves" and you'll find they play at peak levels more often than nearly everyone they face. It's how you win football games!

It doesn't matter who the Badgers play next week, or the week after. They're going to bring their best game, and it's not a reach to believe they can beat Nebraska, win the West, and end up playing either Michigan or OSU again, in the Big 10 Championship game.

What looked for a season of searching for players to step up, and an identity at QB, I think it's all there, it just needs to be polished. I'm just going to say that Alex Hornibrook has played beyond what any of us have a right to have expected, at this juncture in his career at Wisconsin. These two losses don't define what he brings to the table, and what we have to realize is that "THE BEST IS YET TO COME!" Hornibrook is going to be that solid under center.

When the Badgers visit Iowa (5-2) next weekend, they'll be visiting a contender for the West title. Their play, in this game, will determine their future. At this point, I think they win. Iowa is good, but our kids believe in themselves.

I actually felt pain when the Badgers lost this one in OT.
I held out hope until the very end....tough loss, but like TW said, there's no shame losing by a TD to such a quality opponent.

No shame at all. UW now controls their destiny. I was very impressed with the Badgers. TW nailed it, as usual. The Badgers arrow is definitely trending up. We'll coached and we'll built team. Michigan and OSU both know the power of UW. So do LSU and Michigan State. This team is on the rise.

Playing like this on national TV could help us with recruiting. The only reason we lost last night (and to MI) is because of the gap in talent. They have 5 star recruits and we have 2 or 3 star kids plus walk-ons. Until we increase the talent, especially at the skill positions and over all speed, we will be close but not good enough.

Pugger said:
Playing like this on national TV could help us with recruiting. The only reason we lost last night (and to MI) is because of the gap in talent. They have 5 star recruits and we have 2 or 3 star kids plus walk-ons. Until we increase the talent, especially at the skill positions and over all speed, we will be close but not good enough.
Click to expand...

What's crazy is that if true, about the recruits, the gap isn't that big because they only lost by 7 in each game. That's some good coaching and good talent.

That's what I keep saying. The future is bright. The support for this program will be overwhelming. It won't stop kids from walking on either. They're always going to be there because there are kids in Wisconsin who downright "refuse" to be told they aren't good enough to take the field as Badgers. Since Alvarez arrived, he's groomed this group, and it grows every year.
You must log in or register to reply here.
Share:
Facebook Twitter Reddit Pinterest Tumblr WhatsApp Email Link
Top